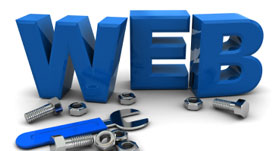 Great news for Sri Lankan web Designers and web design companies in Sri Lanka. The telecommunication levy on internet and broadband services will be reduced by fifty percent with effect from January 2013, says the Telecommunication Regulatory Commission.

Accordingly the currently levy of 20 percent will be reduced to 10 percent starting from next year, Director General of TRC Anusha Palpita said.

The TRC states that presently the number of internet users in the country has exceeded 1.2 million and that the levy is being halved in order to increase internet usage.